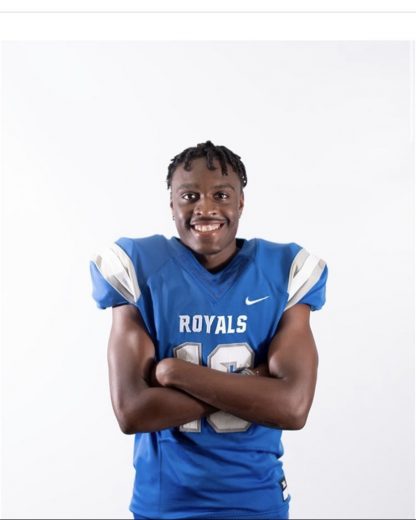 It is a warm Friday night in August as the sun beams down on the field. It is the Royals home football opener, and Mikah Phillips, along with the rest of the team, is ready to beat North Central amidst a sea of mask-wearing spectators.

The last time Phillips was on HSE’s field, things did not go as planned. He broke his ankle and had to go through a rigorous recovery process.

“The recovery process was long, had to do lots of PT,” said Phillips. “Originally, they thought it was a high sprain, and then I got x-rayed and it was clearly a break. It was a setback because I was doing the wrong type of PT for a while.”

Although he had setbacks, Phillips was able to return just in time for track season and was completely healthy when football started up again this fall.

“Mikah is extremely humble and dedicated,” said teammate senior and starting linebacker Larry Jones. “He contributes reliability and a spark to the defense like no other.”

Phillips has had a great start to the season so far. In the home opener against North Central, he recorded two interceptions and two tackles, a performance that stood out from the rest of the team.

Said Phillips, “It feels great, it feels good to be around everyone, friends, people that encouraged me since day 1, it’s a welcoming feeling”

He might have broken his ankle, but no injury is going to keep Phillips from being great on the field.