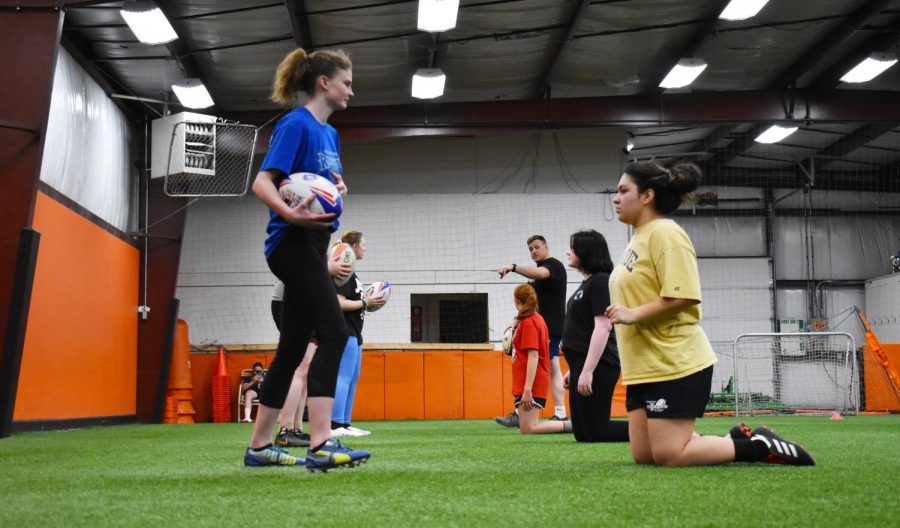 Rugby is a contact sport that originated in England with the first rules of the rugby union football were set in 1845. Jasann St James is a sophomore at HSE High School and has been playing rugby for 2 years now. St James joined rugby because she heard all about it and wanted a contact sport to be involved in. I asked the question on how rugby has affected her life and she responded, “Rugby has affected my life in the ways other sports couldn’t, it gave me excitement and a happy feeling all the time.”

Since rugby is categorized as a contact sport you are required to wear protective gear while playing. Players may choose to wear pads protecting their chest or head, but a mouth guard is not optional. Hard plastics and metals are not allowed as protective gear because they can cause more harm than protection.

This is the first year that Fishers and HSE rugby has joined together for their first season and the Mudsocks. There are 18 players and 5 coaches (see names below)

There are multiple factors that go into playing the game and her favorite part is the running, tackling, and kicking. Then her least favorite is the drills and practice.

I had the opportunity to go to the Mudsocks first practice of this season to watch and take pictures. St James said that teamwork is the most important part of the game and while watching them you can see all the amazing teamwork and effort put into this team.

Two of the coaches, Coach Kara Fick & Coach Neill gave me some of their feedback on St James and their team.

“She’s a fast smart player that knows the game and is willing to be a really good team player she’s motivating she’s a good asset to the team,” said Coach Neill.

“I was asked 3 years ago to help start the first youth girl’s rugby team for Mudsocks and had the privilege of having Jasann on my first team I coached. Since then, Jasann has not only shown a love for the game but has actively helped recruit others to join the game as well. Player support and recruitment is crucial to helping us grow the game and Jasann has been very influential since she joined,” stated Coach Kara.

To understand how the game is played you first need to know some definitions and what positions there are.

Loose-Head Prop: they form part of the front row of the scrum and push against the opposing props. It’s positioned to the left of the hooker and their head on the outside of the scrum when engaged. Its main role is to provide stability at the scrum and support the hooker.
Scrum: a method of restarting a play that involves players packing closely together with their heads down and attempting to gain possession of the ball
Scrum-Half: The link between the forwards and the backs. They receive the ball from the line-out and remove the ball from the back of the scrum, usually passing it to the fly-half. They read the scrum.
Flanker: Plays forward.
Hooker: during a scrum, the hooker plays in the front row and the positions name comes from their role of “hooking” the ball back with the foot
Left/Right Wing: The left-wing kicks left-footed and provides an extra person in the midfield, in the same vein as a full back. Then the right-wing is positioned on the outside of the backline, and their primary function is to finish off moves and score tries.
Fly-High: A player who acts as a link between the scrumhalf.
Full Back: The last line of defense, having to tackle any opposing players and regather the ball from any kicks that make it through their teammates.
Tries: A try is a score.

Rugby plays by jersey numbers and this is how St. James describes the format of the game,

“Jersey 1 is the loose-head prop, jersey 3 is a tight-head prop, and they work together to hold jersey 2, the hooker, up enough to hover over the ground, and the hooker fights for the ball with the opposing hooker. Jersey 4 and 5 are the locks in the second row and their head goes in between jersey 1 and 2, and then 2 and 3. Jersey 6 is a blind-side flanker, they are only there for support in case the ball goes left. Jersey 7 is an open-side flanker, they see the ball go into the scrum and know where it’s going. Jersey 8 is in the back of the scrum; their head goes through 4 and 5 then pushes the whole scrum forward.

Jersey 9 is the scrum-half; they stand on the outside of the scrum so then when the ball leaves the scrum to start their line. Jersey 10 is the fly-half; they are the start of the line jersey 9 had started. Then jersey 9 passes it out to 10. Jersey 11 is the left-wing, they are at the end of the line, and will get the ball last, but they have more field to see. Jersey 12 is the inside center, they stand close to the fly-half and are in between jersey 10and 11. Jersey 13 is the outside center, they stand behind the inside center and they tend to be faster out of the two centers, meaning they can either run or get the ball out faster. Jersey 14 is the right-wing; they are the only ones on the left side just in case the ball leaves the scrum that way or if the field is open and they get passed the ball from the scrum-half. Jersey 15 is the full-back, they are important with getting the ball out fast, they tend to be faster than all other positions. They are also the kicker who kicks the ball either out or to their try zone and after they kick they have to get in front of all other payers on their team.”

“I would encourage people to join because it has not only taught me teamwork,” said St James. “but what it’s like to have a structure to hold onto.”

Lastly, I asked St James how rugby has affected her life and she responded, “Rugby has affected my life in the ways other sports couldn’t, it gave me excitement and a happy feeling all the time.”