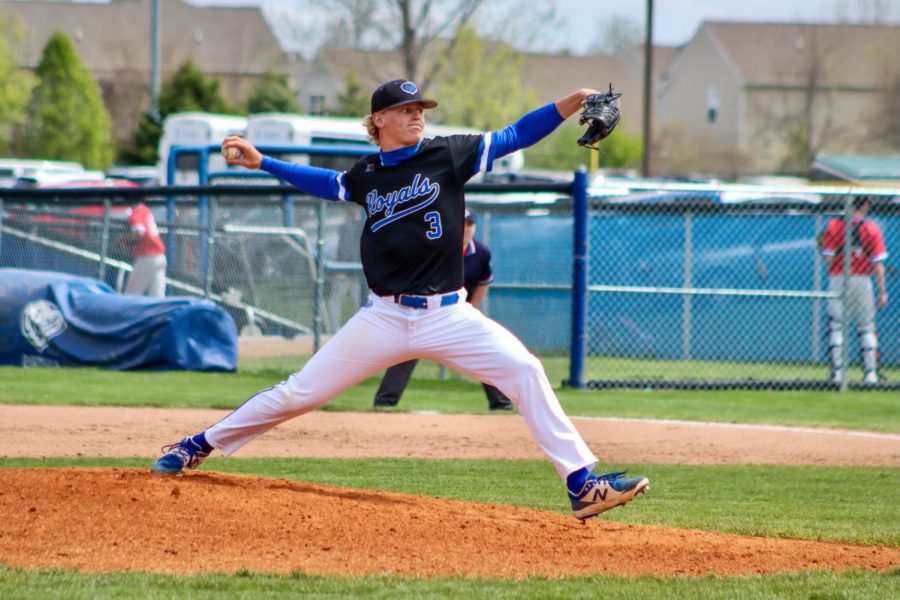 The Royals varsity baseball squad had a busy week, hosting games against #8 Zionsville and #9 Carmel, as well as a doubleheader against the Kokomo Wildkats.

To begin the week, the Royals hosted the 9th ranked Carmel Greyhounds for a one-game showdown. Carmel edged out the Royals 6-4. Sam Reagan started the game for the Royals, going four innings, allowing just two runs on four hits, while striking out four batters. Jason Dettman entered the game and took the loss for the Royals, letting up four runs on three hits in 2 innings pitched. Griffen Haas led the Royals offensively, driving in three of the Royals four runs, going deep for his first home run of the season. Landon Riekhof also chipped in an RBI single.

Later in the week, the Royals took on the 8th ranked Zionsville Eagles in a two-game series, one on the road and one at home. The Royals started the series on the road and struggled mightily, losing 0-7 while only tallying one hit courtesy of Cole Earlewine in the 7th inning to diminish Zionsville’s chance at a no-hitter. John McCall went four innings on the hill, allowing one hit, two runs, but giving up eight walks. Logan Callaghan came in relief and gave up five earned runs, five hits, and one walk in two innings pitched. Nate Dohm picked up the win for the Eagles in an impressive outing, going 6 1/3 while only giving up one hit, no runs, but most impressively striking out 16 batters.

Zionsville hit the road for the latter end of the double-header and unlike the first game, it was the Royals who got off to a hot start, taking the lead 3-1 in the first inning before Zionsville took that lead over for good in the 4th inning. The Eagles swept the Royals in the doubleheader, winning the second game 9-3. J.T Mutchner led the team going 2/2 with an RBI and a walk. Colin St. Clair and Peyton Lusby also chipped in hits for the Royals. On the mound, Ty Bradle got the start and went 3 1/3 while allowing five hits, four walks, and three earned runs. Sam Reagan and Eli Lantz came in to finish the game and Zionsville got to them, giving up two earned runs each. Drew Dickson got the start for Zionsville and went 5 1/3, giving up four hits, one earned run but struck out ten.

To cap off the loaded week, the Kokomo Wildkats came to town for an early morning doubleheader. Colin St. Clair got the start in the first of the two games. St. Clair had a solid outing in his first start of the season going four innings and letting up six hits, five earned runs and striking out four. Griffen Haas came in relief for an inning and struggled, giving up three earned runs. Logan Callahan then finished the game out, picking up the win and went 2 innings, giving up one hit and one walk. Noah Wolf went 3/4 with three runs. Hunter Dilts also had a big performance, picking up 3 RBI’S. The Royals picked up the victory 9-8 in a close one.

After about a 45 minute break, the two teams returned for another bout, this one being much less entertaining. The Royals took this one 12-1 (5 innings) in a shortened game due to the IHSAA run rule. Cam Howard pitched a gem, going 5 innings which was a complete game, giving up three hits, one walk, and struck out 3. Colin St. Clair went 2/2 with 3 RBI’S to lead the home squad.Cole Earlewine also pitched in, going 2/3 with 2 RBI’S. Noah Wolf was another main contributior in this one, knocking in two runs while also scoring 3 runs.

The 5-6-1 Royals are back in action this week with this schedule below:

This wonderful man graduated from Columbia University and impresses everyone with his fresh and creative ideas. He has a degree in engineering, but it’s not really his cup of tea. Content creation is his vocation. That’s why he chose 1ws.com and works as a writer here. Students are delighted with the results of his work.