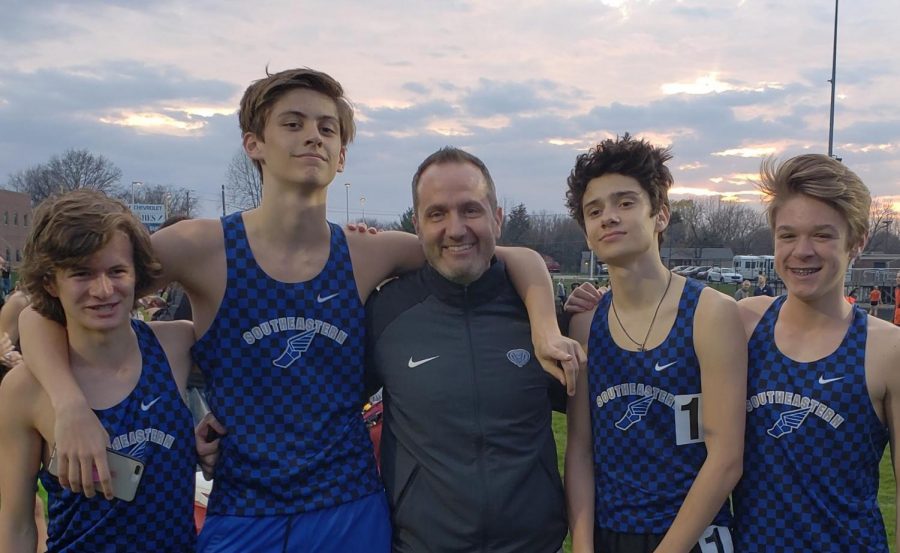 Joe Golden is not only a math teacher here at HSE, but he is also the varsity cross country coach.

Golden got his start as a cross country runner in a little suburb named Elmwood Park, right outside of Chicago. As a sophomore in high school, Golden began running cross country, while also being included in wrestling and track. Golden attended Lewis University as a cross country and track runner. He graduated from Lewis with an undergraduate bachelor’s degree in physics and math and studied computer technology for his master’s. During his college career, he was an All-American Distance Runner as well.

Before his time at HSE, Golden taught and coached at Carmel for 6 years, though he is embarrassed to say it. Golden loved HSE’s great reputation and fell in love with the school. Since then, he has been teaching and coaching at HSE for the last 18 years.

Golden was always a fan of gym classes as a student and found himself being good at a running distance. He decided to join the cross-country team, and it turned out to be something he loved doing. Although no one in specific inspired him to begin coaching, it was what coaching does for people that got his interest. “I love what running does for people,” Golden said. “I wanted to share those experiences”

One of Golden’s favorite parts of being is the team aspect. “What you learn through being a part of a team,” Golden said. “Will someday be more important than how fast you might run.” That is what is most important for his runners to know.

Outside of coaching and teaching, Golden spends his time working out and doing exercise. Whether that’s biking, lifting, or whatever he enjoys doing. When he’s not working out, he can be found traveling or hiking out west.

The highlight of Golden’s coaching career would be when his team won the state title for track in 2013.  Outside of his school accomplishments, Golden was an All-American Triathlete and competed in the Ironman World Championships.

“[To those thinking of joining Cross Country] It’s not nearly as hard as it seems,” Golden said. “You get used to running volume quickly and you soon learn to love it”