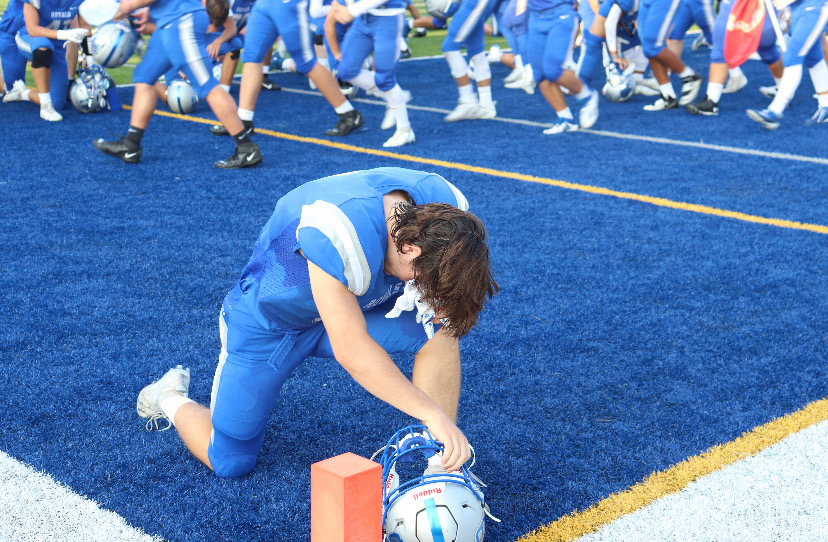 Staring into the Friday night lights, junior Noah Wolf has adrenaline rushing through his body as he gets increasingly excited to play in a place he loves, the football field.  As he keeps the expectations of others in his head, his motivation drives him to play his best for his team.

Off the field, Wolf has several other priorities such as his diet. Wolf mentioned that he cannot eat ice cream sandwiches with his team after games. Considering the fact that he is allergic to milk, eggs, and fish, there are many obstacles, not including the ice cream, that he must cross. Wolf sticks to a diet that differs depending on the day or situation. Regular days include pop tarts, smoothies, and turkey sandwiches. Before a game, Wolf eats Subway to get the protein he needs to perform well on the field. Though this does not seem like much, little things like this have had an impact on him his entire life.

Wolf started football at a young age and has continued to play throughout those years. Football has always been a part of his life and his love for the game has grown an immense amount specifically this season. “I have never enjoyed football like I have this year,” said Wolf. “It’s different this year. There is a different feel and things are changing.” Wolf’s teammates consistently inspire him. Along with giving Wolf support, they offer challenging competition to motivate him to excel.

Junior Adyson Klein is the varsity boys football team manager for this season. Klein has seen the boys in many different scenarios. “Noah is an overall team player. He is always communicating on the field and helping the defense play to the best of their abilities. Noah is a ball of energy whether he is on the field, sidelines, or even the locker room. He is always hyping up his teammates and is very inclusive,” stated Klein.

Though Wolf has a complex diet and nutrition needs, nothing has stopped him from inspiring others and being a role model to those who surround him. Wolf is going to continue to work hard and not let anything set him back.