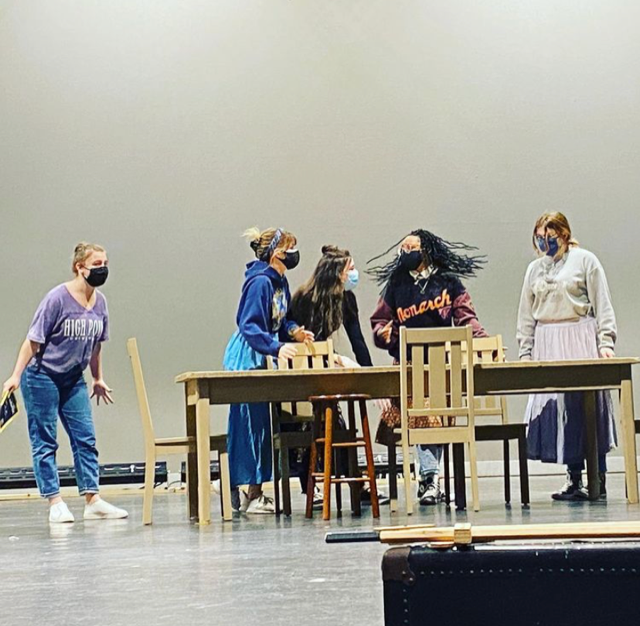 Whenever a show is based off of a famous work of literature, comparisons are inevitable. Whether the comparisons are favorable, negative, or indifferent, the pressure still radiates through the cast and crew in the days and weeks leading up to the show. Thespian Troup 520 out of HSE High School is feeling the weight of their show, Little Women. The story was originally published in 1868 and 1869 by Louisa May Alcott. The story was then turned into a movie in 2019 starring Emma Watson, and now will grace the stage of HSE High School as performed by the “honor society” of sorts for HSE Drama. Little Women is a coming-of-age story that follows the March sisters as they live through Civil War era Boston and experiences that the family goes through in the tough stages of life.

“I think that Little Women is significant because it is a display of strong and independent young women,” senior Lexy Hatch said. “It is especially important to consider how old the story of Little Women is and that it was written by a woman.”

With historic characters that are symbols of early feminism for many, it causes stress for the actors to fulfill the role of their character. One such person is senior Audrey Caron, who is portraying Jo March.

“Jo resonates with a lot of people, which puts a lot of pressure on me,” Caron said. “A lot of people have a perfect idea of what Jo should be and I think that is the main challenge I face. I want to portray Jo in my own way while still being the Jo everyone knows and loves.”

This years’ Thespian Show will be a celebration of the dedication that has been shown by so many people on stage and behind the scenes. It is fitting that a story of a family finding their way through uncertain times as that is what the Thespians are in a sense, a family.

“I have acquired bonds with my friends like no other,” Caron said. “This story is real, it is vulnerable, and being vulnerable with my fellow cast-mares has definitely made us beyond close.”

The Spring Musical is still to come in late April, but the Thespian show is truly the culmination of people that have devoted their hearts and souls to the art of theatre for many years. From all of the dress rehearsals, auditions, and opening night’s they have become a family. That family will embark on their penultimate show, one appropriately of family and overcoming hardships, on March 11 to March 13. Story by Tristan Fluhr